Watch for New Paid Sick Leave Rules for Some Workers 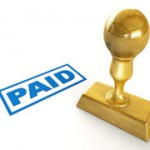 Last September, President Obama issued an executive order requiring federal contractors to allow employees at least seven days of paid sick leave. Proposed regulations issued in late February 2016 (subject to public comment until March 28) added flesh to the bones of the executive order. Final regulations are to be published and will take effect by September 30.

The number of people working under contract for the federal government is huge — so big, in fact, that the Congressional Budget Office last year couldn’t even estimate a number when asked to do so by a member of the House Budget Committee.

In its 2014 fiscal year, the federal government spent $619 billion for contracted products and services, which suggests that a vast army of workers will be covered by the paid sick leave requirement. For perspective, that’s about 30% above the annual revenue of Walmart, the largest private employer, with some 2.2 million workers.

The President’s goal in issuing the order was not just to ensure paid sick leave benefits for those specific workers, but to set an informal standard for all other employers. While a significant proportion of employers already provide some paid sick leave, few are likely to have a policy as liberal as the one that will apply to federal contractors.

Here is some of the key language defining the basis on which a contractor’s employee can receive paid sick leave. Specifically, paid sick leave earned may be used by an employee for an absence resulting from:

The proposed regulation elaborates on what is meant by the “equivalent of a family relationship,” while noting it cannot list every possibility. Here are some examples:

What Verification Can You Ask for?

Although employers can probe a little bit when the leave request pertains to a nonfamily member, “the contractor may not demand intimate details upon receiving a positive response to such an inquiry,” the proposal says.

When sick leave requests involve medical care, employers would not be permitted to demand evidence of that need for care until the employee had taken at least three days of leave. At that point, the employer could ask for certification from a health care provider. However, the employee would not be required to supply the documentation before 30 days had elapsed.

Once the rules go into effect, federal contractors will need to maintain detailed records of actions related to paid sick leave requests and the granting of those requests.

Penalties for employers who are found to violate the regulations’ requirements will be similar to those imposed under the Family and Medical Leave Act. Specifically, employers will be required to compensate employees for costs they incur as a result of being denied paid leave, such as wages and benefits forfeited by taking leave without pay.

How Will this Affect Your Company?

As noted, the regulations technically will not dictate policy for companies that don’t do business with the federal government. But knowing what’s coming down the pike for them can help you prepare for possible questions about your own sick leave policies, and help you to ensure that your benefits are sufficient to keep you competitive in your labor market.