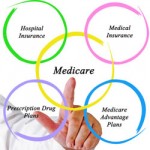 Do you pay Medicare insurance premiums or are you getting close to the age when you’ll become eligible for Medicare coverage? A recently enacted law made changes that will cause some upper-income people to pay higher premium surcharges in the future. This article explains who will face the higher surcharges, as well as the tax treatment and 2015 premiums for Medicare Part A, Part B and Part D insurance coverage.

Medicare Part A coverage is commonly called hospital insurance. It covers inpatient hospital care, skilled nursing facility care and some home health care services. Most Medicare-eligible individuals are automatically covered for Part A without having to pay premiums because they’re considered to have paid them during their working years through Medicare taxes paid on wages and self-employment income.

However, some individuals who paid little or no Medicare taxes during their working years must pay premiums to get Part A coverage.

Medicare Part B coverage is commonly called medical insurance. Part B, together with Part A (explained above), comprises what’s often called “original Medicare.” Part B mainly covers doctors and outpatient services, and most people must pay monthly premiums to receive this benefit.

For 2015, most individuals will pay the standard Part B premium of $104.90 per month ($1,259 for each covered person if premiums are paid for the full year). However, as your income goes up, you pay more via premium surcharges.

For 2015, the surcharges are based on the modified adjusted gross income (MAGI) that was shown on your 2013 federal income tax return. The surcharges go up as your 2013 MAGI goes up. Specifically, for 2015, higher-income folks are defined as singles with 2013 MAGI in excess of $85,000 and married joint-filing couples with MAGI in excess of $170,000.

Including the surcharges, the 2015 Part B monthly premiums for each covered person can be:

As you can see, Part B premiums for higher-income individuals can be significant, especially if two spouses are paying them.

Medicare Part C coverage is generally called Medicare Advantage and is private health insurance. It supplements government-provided Part A and Part B coverage. Part C premiums vary depending on the plan.

Medicare Part D coverage is for prescription drugs and premiums vary depending on the plan. Higher-income folks pay a surcharge in addition to their basic plan premiums. The surcharges go up as your 2013 MAGI goes up, using the same scale as for Medicare Part B premium surcharges.

Medigap is private supplemental insurance similar to Part C coverage. If you have a Medigap policy, you don’t need Part C coverage and vice versa. Medigap premiums vary depending on the plan.

On April 16, 2015, the Medicare and CHIP Reauthorization Act became law. It is commonly referred to as the “Doc Fix law” because it makes permanent adjustments to how physicians are paid for treating Medicare patients. In the past, physician payment cuts were scheduled to occur each year and were then postponed to the following year. This happened over and over. The new legislation brings a halt to this practice. That’s the good news.

The bad news is the new law will increase the Medicare Part B and Part D premium surcharges that many higher-income folks must pay, starting in 2018. The increased surcharges will affect singles with 2016 MAGI between $133,501 and $214,000 and married joint-filing couples with 2016 MAGI between $267,001 and $428,000. It’s estimated that the higher surcharges will cost the average affected individual about $1,000 per year (about $2,000 for the average affected married couple).

To make matters worse, due to the joint effects of inflation and the new law’s changes to physician payment schedules, Medicare Part B premiums will also increase for people whose incomes are not high enough to be affected by the premium surcharges. As mentioned earlier, the basic 2015 Part B monthly premium is $104.90. The Congressional Budget Office estimates it will rise to $181 in 2025.

Finally, starting in 2020, the new law will impose a deductible that must be satisfied before benefits can be paid under Medigap policies. The Medicare Board of Trustees estimates that the deductible for 2020 will be $185, rising to $217 in 2023.

How this Affects Year-End Tax Planning

Premiums for Medicare insurance can be substantial. Due to the Doc Fix legislation, they’ll be even higher for many upper-income people starting in 2018. Since the Medicare Part B and Part D premiums charged in 2018 will depend on your 2016 MAGI, year-end tax planning moves that would push income from this year into 2016 (thereby increasing your 2016 MAGI) could have the negative side effect of increasing your 2018 Medicare Part B and Part D premiums. This is just one more moving part to consider in year-end tax planning. Consult with your tax adviser about your situation.