Paying Yourself Too Much? Too Little? Be Ready for an IRS Challenge — What is Reasonable? 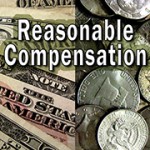 It is generally more tax-efficient to be paid a salary than to receive dividends, given that salary expense is deductible and dividends are paid on an after-tax basis. If the IRS thinks some portion of your salary really should be treated as a distribution of profit, that portion would be added to the pool of corporate revenue subject to tax.

It all comes down to the IRS definition of “reasonable.”

It all comes down to the meaning of the word “reasonable.”

“Whether the pay is reasonable depends on the circumstances that existed when you contracted for the services, not those that exist when the reasonableness is questioned,” according to the IRS.

Suppose, for example, you paid yourself a $250,000 salary at a time when your company was small, with gross revenue of $500,000, two employees besides yourself, and you were not working around the clock. Suppose further that after five years your business has tripled in size and you are still paying yourself $250,000.

If the IRS determined that, five years ago, a “reasonable” salary for your business would only have been $130,000, you’d have to pay corporate taxes on the extra $120,000 for that period. This is based on the finding that anything above $130,000 is deemed to be excessive and thus a “constructive dividend.”

So how does the IRS assess reasonableness? There is no hard and fast rule; it’s a matter of “facts and circumstances.” But these are the key factors they will likely consider:

Another approach used by courts, when companies decide to fight an adverse ruling from the IRS, is to apply a return-on-equity (ROE) calculation. The rationale behind the calculation was laid out in a landmark court ruling from 1999.*

This metric determines the company’s ROE after the executive salary is factored in. So if the salary is such that it drives the ROE down to a level most investors would consider unreasonable for that industry, then the salary is too high. Here’s an example of how this works. Let’s say you decided that a 10 percent return on equity is reasonable for your industry. You could just set your salary at the limit of what would still allow a hypothetical investor to see that 10 percent ROE achieved.

Let’s say the company has a bad year or two and the ROE is sub-par. Would the IRS then expect the executive salary to be slashed to the point where ROE is again acceptable to a hypothetical investor? Not necessarily. But if the company’s fortunes were lagging over a period of time, a downward salary adjustment might be needed to keep it safely in the “reasonable” range.

What about underpaying yourself if you’re running an S corporation? Why would you want to do such a thing? The answer is payroll tax minimization. Since the company’s earnings flow through to shareholders’ individual tax returns, those earnings will be taxed at the personal level no matter what. But when paid out as distributions of profit, generally those are not subject to payroll taxes.

The IRS staked out its position on that topic a long time ago in IRS Revenue Ruling 59-221, which it subsequently elaborated on in IRS Private Letter Ruling (PLR) 131363-02.

“Generally … if a shareholder of an S corporation performs services for the corporation, any distribution to the shareholder, even if legally declared under state law by the S corporation as a dividend, will be characterized as ‘wages’ subject to employment taxes where in reality the payments are for services,” the IRS informed a taxpayer in that PLR.

Note: A private letter ruling only applies to the taxpayer who requested it. It cannot be relied on as precedent by other taxpayers. But it can a good indication of how the IRS would rule in a similar situation.

To assess whether an S corporation shareholder is taking a salary that’s too low, the IRS will analyze the compensation similarly to how it would assess excessive compensation. Fundamentally, it will determine whether the shareholder performed services for the corporation, and if so, apply its reasonableness methodology to check for low-balling.

Whether you need to justify a high or low salary, the bottom line is … have good documentation. The longer you have been operating under written compensation policies and procedures that incorporate competitive market data, the stronger a case you can make.