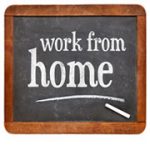 An exception to this policy exists for situations “where hazardous materials, equipment, or work processes are provided or required to be used in an employee’s home.” Chances are, not even OSHA with its rigorous regulations, would classify simple office items — for example, staplers, shredders and letter openers — as hazardous equipment.

It’s also worth keeping in mind that, while it seems improbable, if the DOL decided to reverse course, doing so wouldn’t require an act of Congress. That’s because the mandate of OSHA is very broad: “To assure, so far as possible, every working man and woman in the nation safe and healthful working conditions.” The law also states that employers are required to furnish employees “a place of employment which is free from recognized hazards.”

Today, state workers’ compensation laws and standards are where the action is. Consider a relatively recent case in Oregon. The state’s court of appeals upheld a claim filed by a woman who tripped over her own dog and was injured while working at home. The case warrants a closer look, however, to clarify why the employer was held liable.

The employee in question spent four out of five workdays each week on the road, showing window treatments, upholstery and other interior decorating samples to customers. Due to a lack of space at the company showroom (which was the employee’s base of operations) the employer required her to keep excess samples at her residence. While walking to the garage to collect the samples she needed for a particular day’s work, the employee tripped over her dog causing her to break her leg.

The employer’s defense stated it was protected from liability by the “going and coming rule, under which injuries suffered while commuting are generally not compensable,” according to the court record. The judge, however, rejected that argument, and focused instead on whether the employee “established a causal connection between her injury and her employment — whether the claimant’s injury resulted from a risk connected to either the nature of her work or her work environment.”

The court’s careful dissection of the precise circumstances suggests that if the employee had tripped over her dog while walking into her kitchen to get a cup of coffee, she would’ve lost the case.

And there’s another factor that played a role in the judge’s decision. That is, the impetus for the employee’s working at home. “If an employer, for its own advantage, demands that a worker furnish the work premises, the risk of those premises encountered in connection with the performance of work are risks of the work environment, even if they are outside of the employer’s control.” That suggests that if this employee had simply telecommuted for her own convenience, the ruling might have gone the other way.

Even so, that’s just one state court ruling. It’s important to learn how similar issues have been decided in your state, so that you don’t become the next test case.

One insurance company recommends that, unless you’re going to actually inspect an employee’s home office, you should create a workplace safety checklist. It could cover such items as whether furniture is ergonomically correct, the adequacy of the lighting and ventilation, and the presence of fire extinguishers and smoke detectors, to name a few examples. Have prospective telecommuting employees complete and return the checklist to you before they begin working at home.

The Society for Human Resource Management has also weighed in on this topic, and recommends the following:

A key advantage of telecommuting employees is scheduling flexibility, so that last recommendation might not fly. Just be aware that its purpose is to make it easier to establish whether an injury was incurred “in the course of” employment, which is a key legal requirement.

There are practical limits to your ability to prevent work-related injuries when employees are telecommuting. However, doing what you can is better than not trying, both for the well-being of those employees, and avoiding workers’ compensation claims.