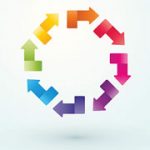 The 360-degree feedback mechanism (also called “multi-rater”) has been in use for decades, thus long enough that it’s been subjected to a battery of academic studies highlighting its benefits and pitfalls. The research has identified both.

First, consider the limitations of the traditional supervisor-only evaluation, particularly for employees who work in teams or who have subordinates of their own. In this environment, direct supervisors:

Using a 360-degree feedback system can indeed help you overcome those impediments, but first you need to decide whether to use it to aid employee development, or as a performance assessment method — or both.

It might be more prudent at the outset to use a 360-degree system in conjunction with an ongoing development process, simply to pinpoint possible areas where that employee might benefit from additional training. Why? That allows you to gain confidence in your ability to evaluate the feedback you get from the 360-degree process, in terms of validity.

With some experience you should be able to weed out feedback that amounts to unfair potshots from disgruntled subordinates or colleagues. Also, the employee in question is more likely to warm up to the 360-degreee process if he or she knows that, in effect, you are giving it a trial run.

If your organization is large enough you might consider starting off with a 360-degree-feedback performance-rating pilot project in one department or division, before launching it company-wide.

It may seem counterintuitive, but 360-degree programs aren’t always anonymous. One school of thought holds that it’s better for all feedback providers to identify themselves in order to:

Advocates of these systems encourage employers not to launch a 360-degree program until they’ve first identified a specific purpose for it. That way they can also establish a basis or benchmark for evaluating the success of the program. An example of a valid purpose might be to change an organization that has developed a rigid hierarchy into one with a culture that emphasizes continuous feedback and improvement.

Keep in mind that when you’re identifying a purpose, this type of system shouldn’t be viewed as a way to address poor employee job performance. Employees might become more self aware through the process, but this feedback isn’t a substitute for direct communication between a supervisor and the employee.

Here are some pointers for implementing an effective 360-degree program:

Of course, there’s no guarantee that a 360-degree feedback system will accomplish whatever goals you set for it. This method of review was pioneered in the 1950s and rose to popularity in the 1990s. Its longevity alone suggests it might be worth a try.