Keep Heated Political Debate in Check in the Workplace 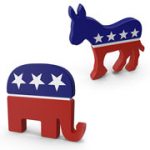 There’s nothing like a heated political debate that spins out of control to kill productivity and damage working relationships. The risk of a workplace harassment charge is also present, if a member of a protected class feels bullied. Generally, there are two approaches to keeping strong political opinions from become a problem at work: by setting a good example, and with an official company policy.

The former, which is often called the “tone at the top,” is straightforward enough. It involves making sure your senior executives keep their political preferences to themselves. If the CEO lets his or her political leanings be known (whether by talking about it or by wearing a political button supporting one candidate), it’ll be tough to keep employees with strong opinions from sounding off.

As for a company policy, you may already have language in your employee handbook that addresses this issue. It’s common, for example, to have a policy stating that employees are to treat each other with civility, which should include political discussions. Even so, as the elections draw closer, it doesn’t hurt to remind your workforce to curb political debate while at work.

A member survey by the Society for Human Resource Management (SHRM) earlier this year found that nearly three quarters of respondents actively discourage political activities in the workplace. Only one quarter, however, have committed their policies to writing.

What You Can Do

You’re well within your rights, for instance, to prohibit employees from distributing strictly political materials or plastering their work areas with political messages. You can also ban the wearing of political buttons under the same authority you use to establish dress code policies.

Depending on how strongly you feel about the hazards of employees’ wearing political buttons, you could focus your policy on customer-facing workers. Although this approach wouldn’t fully address the potential for conflict among non-customer-facing employees, it at least eliminates the risk of alienating the people who buy your products or services.

Political expression by employees outside the workplace is, of course, beyond the scope of employer authority. To maximize employee compliance, be sure to explain that the purpose of the policy isn’t to suppress employees’ political views, but to avoid the inadvertent infliction of emotional distress. It’s not self-evident to many people with strong views (on any topic) that their robust expression of opinions can be distressing to others.

There are both legal and practical constraints on your ability to restrain political speech in the workplace. On the legal side, First Amendment notwithstanding, the National Labor Relations Act (NLRA) addresses the matter peripherally. Specifically, employers cannot ban employees from participating in “concerted activity,” such as speech pertaining to the “mutual aid and protection of employees” — in other words, labor union related actions.

What does labor union related actions refer to? It means employees can wear union-related clothing and buttons, which could be interpreted as a form of “political” expression. However, the NLRA does not sanction union membership solicitation during working hours. In any case, it’s important to draw a distinction between “political” and union-related communication.

When you unveil or re-introduce your policy, be sure to include an explanation of the procedure employees should follow if they feel others are violating the policy in order to trigger a company response.

If you have introduced a policy on political activity — or even if you haven’t — take seriously any employee complaints you receive about political harassment. As noted, if not investigated and properly addressed, complaints can evolve into legal charges.

Finally, you can incorporate a positive message into your worksite politicking policy: Encourage employees to take advantage of their opportunity to vote. Although you may already be required to do so under state law, you can let employees take time off from work to vote, preferably at the beginning or end of a shift if the polls are open.

A high proportion of employers participating in the SHRM poll (86%) do give employees that freedom. About half don’t pay employees for the time they take to vote; roughly one-third do.

Emotional feelings about political matters don’t disappear once the election is over. While they may reach a crescendo on Nov. 8th, you’ll probably need to maintain your policy on Nov. 9th and every day thereafter. Don’t hesitate to remind your employees that, whatever the outcome, civility must rule the day in the workplace.