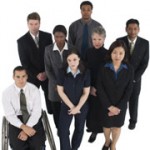 Although the total number of cases filed against employers in 2014 was down slightly from the year before, charges are up significantly from a decade earlier (see chart). The EEOC has not given a reason for the long-term increase. However, many HR professionals and employment law attorneys attribute it to the aging population and an expanded disability definition that took effect in January 2009.

Under federal law, disability discrimination can occur when:

The federal Americans with Disabilities Act (ADA) requires covered employers to provide reasonable accommodations to employees and applicants with disabilities, unless doing so would cause significant difficulty or expense.

Here are three recent examples of disability discrimination cases. In these situations, according to the EEOC, the agency filed suit in U.S. District Courts after attempting to reach pre-litigation settlements through its conciliation process.

The case began when an employee missed a day of work and was asked to fill out a company health information form to verify that his absence was for medical reasons. If the form wasn’t fully filled out, absences weren’t excused. The EEOC alleged the company subjected employees to unlawful medical inquiries and adverse employment actions including coercion, intimidation, threats and retaliation for refusing to comply.

“Requiring employees to reveal the specific nature of their medical illness in order to deem the use of sick leave an excused absence is an unlawful disability-related inquiry under the ADA not justified by business necessity,” said Regional Attorney Debra Lawrence of the EEOC Philadelphia District Office.

“Employees should not have to worry that their private and potentially harmful information will be used against them later to unfairly exclude them from jobs they could otherwise perform,” she added.

2. Employee with Cancer Fired. A bearings manufacturer will pay $50,000 and provide significant relief to settle a disability discrimination lawsuit, the EEOC announced on June 24.

According to the lawsuit, an employee at the company operated a motorized scooter to move products and materials to and from an assembly line. The company’s medical staff imposed restrictions on the employee because she was treated for cancer. The EEOC alleged that the employee’s own doctor cleared her to work without any restrictions, but the company didn’t consider outside medical opinions and fired her.

3. Employee Fired Due to Perceived Disability. The EEOC filed a lawsuit on June 22 against a human plasma collection company. The suit alleges the company violated federal law by discriminating against an employee believed to have tested positive for human immunodeficiency virus (HIV).

According to the EEOC suit, the company placed the employee on a deferred donor list after an initial screening for a plasma donation showed a viral marker for HIV. The employee was immediately discharged after his supervisor learned about the result. Subsequent tests showed the employee was negative for HIV.

The agency’s lawsuit seeks monetary relief for the employee in the form of back pay and compensatory and punitive damages, as well as a permanent injunction against further discrimination on the basis of disability.

“Discharging someone simply because the employer perceives a disability is a violation of the ADA,” said Katharine W. Kores, district director of the EEOC Memphis District Office.

When an employee discloses that he or she has a disability and requests a reasonable accommodation, an employer should engage in an interactive process to determine how to provide one.

Train all managers, including those who are hiring decision-makers, how to recruit, hire and promote employees with ADA compliance in mind. For more information about adhering to the law, consult with your HR professional and employment attorney or click here to read “A Primer for Small Business” from the EEOC.