Can You Stop Employees from Comparing Their Wages? 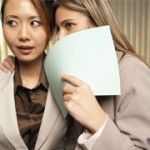 There are many legitimate reasons why two of your employees — with roughly equal job responsibilities and possibly even the same title — are paid different wages. One basic example might be job performance. Or the answer could lay in the labor market conditions at the time each of the employees was hired. Then again, it could be that the employees only believe their jobs are similar, when in fact, they aren’t.

Whatever the reasons, it’s not hard to predict that if two employees who think they do the same job begin to compare paychecks, trouble can soon follow. That’s why some employers forbid or discourage workers from divulging their wages to each other. To avoid workplace squabbles, it may seem like a good idea to create a policy, formal or informal that prohibits this topic of discussion.

In fact, many employees believe they are barred from talking about pay. In a survey taken a few years ago by the Institute for Women’s Policy Research, nearly one quarter of respondents were under the impression they are specifically prohibited from talking about their wages (whether or not there is a formal policy). In reality, implementing such rules might be illegal, depending on the particulars of the policy and the state you operate in.

Section 7 of the National Labor Relations Act (NLRA) “protects non-supervisory employees who are covered by the Act from employer retaliation when they discuss their wages or working conditions with their colleagues as part of a concerted activity to improve them,” according to a Department of Labor “fact sheet” on the topic. The Labor Department also explains that these protections remain in place “even if there is no union or other formal organization involved in the effort.”

The term “concerted activity” has been defined and redefined numerous times by courts in labor dispute cases. Basically, it involves “two or more employees acting together to improve wages or working conditions,” according to the NLRB.

In a March 18, 2015 memo to the Board’s enforcement personnel, the NLRB’s top lawyer wrote that even “well intentioned” employee policy manuals can inadvertently contain rules “that would inhibit employees from engaging in activities protected by the [NLRA].” Here are three examples included in the memo:

The problem with such language, said NLRB General Counsel Richard F. Griffin Jr., is that employees reading it could “reasonably” assume that the ban covers terms and conditions of employment. Similarly, “a confidentiality rule that broadly encompasses ’employee’ or ‘personnel’ information, without further clarification, will reasonably be construed by employees” to restrict their rights under the NLRA, the memo states.

Language, on the other hand, that clearly refers to other kinds of proprietary business information, such as a client list or trade secret, would pose no problem if prohibited.

As noted, the NLRA’s restrictions on pay confidentiality rules apply only to non-supervisory employees. The law also does not cover public sector and nonprofit religious organizations.

Last year, an effort to implement a broader federal ban on “pay secrecy” rules — called the “Paycheck Fairness Act” — failed to pass muster in Congress. However, President Obama subsequently issued an executive order prohibiting federal contractors and subcontractors from firing or disciplining any employee on the basis of disclosing his or her compensation to another employee.

Meanwhile, California, Colorado, Connecticut, the District of Columbia, Illinois, Louisiana, Maine, Minnesota, New Hampshire, New Jersey and Vermont have their own laws against punishing employees for discussing their pay.

For example, California’s Labor Code (Section 232) includes these points: “No employer may do any of the following:

a.Require, as a condition of employment, that an employee refrain from disclosing the amount of his or her wages.

b. Require an employee to sign a waiver or other document that purports to deny the employee the right to disclose the amount of his or her wages.

c. Discharge, formally discipline, or otherwise discriminate against an employee who discloses the amount of his or her wages.”

This doesn’t mean that employees have unfettered rights to talk about their wages and working conditions. Generally speaking, employers can limit employees from discussing these topics while they are at work, as opposed to on their own time. However, to be safe, check with a labor law expert on variations where your business is located,

In the event that an employee gains unauthorized access to payroll files and then discloses wage information, that employee can be subject to discipline. The same is true if an employee divulges compensation information that is deemed private under HIPAA or the Americans with Disabilities Act.

How can you legally discourage employees from comparing notes on pay? Taking a broader approach, the Texas Workforce Commission offers the following suggestion, which employers in and outside of Texas might find helpful: “In the context of a general discussion about the importance of devoting oneself to work during work hours, counsel employees that it is all right to discuss various things at work … but that as in most things, moderation usually works best, and there is a fine line between being informative or conversational and being a busybody, a time-waster, or perceived as self-important.”

Once again, because laws vary by location, you need to know what your state allows. To avoid running afoul of the law, check with a labor law expert in your area to find out what your state has to say on the subject.