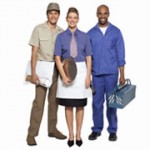 The Administrator’s Interpretation 2015-1 is from David Weil, who heads the WHD. It elaborates on positions the agency has taken earlier on the employee versus independent contractor issue, citing many federal courts’ interpretations of the Fair Labor Standards Act (FLSA).

Noting that the matter of improper classification requires a “multi-pronged approach,” the WHD is working with the IRS and states to tackle misclassification.

Weil notes that the origin of legal definitions of employee came from state laws intended to stamp out unlawful child labor. Employers in the early 20th Century sought to circumvent child labor laws by having middlemen do the hiring and supervising of child laborers. Those employers then claimed to be unaware that children were doing the work.

Over time, the definition of an employee evolved into a series of six factors based on an “economic realities test.” At the heart of the factors is “whether the worker is economically dependent on the employer or in business for him or herself.” The Administrator’s Interpretation also states that, while all of the factors must be considered in each case, no one factor is determinative of whether a worker is an employee — not even the “control” factor (See “What is the Nature and Degree of the Employer’s Control?” below.)

The WHD warns against applying the factors “in a mechanical fashion.” Rather, they should be applied “with an understanding that the factors are indicators of the broader concept of economic dependence.”

Here are the six basic factors and how the WHD views their scope (though the agency cautions that some courts may consider other factors).

1. Is the Work an Integral Part of the Employer’s Business?

The more essential the work is, the more likely the worker is to be economically dependent on the employer. It doesn’t matter how many workers perform a particular task.

WHD uses the example of a call center. Answering calls is integral to a call center’s business “even if it is performed away from the employer’s premises, or at the worker’s home.”

2. Does the Worker’s Managerial Skill Affect His or Her Opportunity for Profit or Loss?

This gets at the question of whether the individual is truly running a business. For example, “a worker’s decision to hire others, purchase materials and equipment, advertise, rent space, and manage time tables may reflect skills” that impact profit or loss, the WHD document states. If the worker’s only way to affect earnings is deciding how many hours to work, that would indicate an employment relationship.

The document illustrates the principle by describing a worker who provides cleaning services for corporate clients. The individual “performs assignments only as determined by a cleaning company, does not independently schedule assignments, solicit additional work from other clients, advertise his services or endeavor to reduce costs.” This appears to be an employment relationship.

On the other hand, if the worker does tasks such as negotiating contracts and deciding which jobs to perform and when, his exercise of such managerial skills is indicative of an independent contractor.

3. How Does the Worker’s Relative Investment Compare to the Employer’s Investment?

A company provides insurance, a vehicle and “all equipment and supplies” for the worker, does advertising for her and finds clients for her, yet classifies her as an independent contractor. Based on the size of the investment of the company, the company is likely her employer. Even if she occasionally brings some of her own preferred cleaning supplies, her investment must be compared to the company’s investment.

If, instead, the worker “invests in a vehicle that is not suitable for personal use and uses it to travel to various work sites … rents his or her own space to store the vehicle and materials … [and] advertises and markets her services and hires a helper for larger jobs,” that would support independent contractor status.

4. Does the Work Performed Require Special Skill and Initiative?

“A worker’s business skills, judgment, and initiative, not his or her technical skills, will aid in determining whether the worker is economically independent,” declares the WHD document. How does that play out?

The WHD offers the example of a “highly skilled” carpenter who provides services for a construction company. He doesn’t choose his job site, the sequence of his work, order additional materials “or think about bidding the next job.” This fact pattern doesn’t support independent contractor status.

In contrast, a carpenter who “provides a specialized service for a variety of area construction companies, for example, custom handcrafted cabinets that are made-to-order, may be demonstrating the skill and initiative of an independent contractor,” the WHD opines.

5. Is the Relationship between the Worker and the Employer Permanent or Indefinite?

“Even if the working relationship lasts weeks or months instead of years,” the document states, “there is likely some permanence or indefiniteness to it as compared to an independent contractor, who typically works on one project for an employer and does not necessarily work continuously or repeatedly for an employer.”

However, the WHD cautions that the lack of permanence doesn’t necessarily indicate independent contractor status. The key “is whether the lack of permanence or indefiniteness is due to operational characteristics intrinsic to the industry.” For example, sporadic part-time work assignments provided directly by companies or staffing agencies doesn’t preclude an employment relationship.

6. What is the Nature and Degree of the Employer’s Control?

This assessment should be made “in light of the ultimate determination whether the worker is economically dependent on the employer, or truly an independent businessperson,” according to the document. The worker “must control meaningful aspects of the work performed such that it is possible to view the worker as a person conducting his or her own business.”

Moreover, that control can’t just be theoretical. “The worker must actually exercise it” the WHD states.

Relationship status depends on the economic realities, the WHD stresses, “and not the label an employer gives it.” Just because a business asks a worker to sign a contract stating he or she is an independent contractor, and issues a Form 1099-MISC, doesn’t mean the individual isn’t an employee.

The Administrator’s Interpretation concludes with this assertion: “In sum, most workers are employees under the FLSA’s broad definitions.” In light of this expansive position from the WHD, if you have any doubt about whether you have classified a worker appropriately, the wise course of action would be to consult a legal professional.