The Current State of Minimum Wage Laws, Plus the Overtime Debate 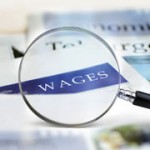 The $7.25 per hour federal minimum wage has been in place since 1991. To have the same purchasing power today, the inflation-adjusted wage would have to be $12.68, according to the CPI Inflation Calculator from the U.S. Bureau of Labor Statistics. President Obama has been supporting an increase in the federal minimum wage to $12 per hour for the past three years.

Pending legislation — the “Raise the Wage Act,” proposed by U.S. Sen. Patty Murray (D-Wash) and supported by presidential candidate Hillary Clinton — would make that happen by 2020. Secretary Clinton’s Democratic rival, Sen. Bernie Sanders, is calling for a prompt increase to $15 per hour.

The Minimum Wage Picture Across the Country

And in these seven states, tips cannot be used to offset the state’s minimum wage:

Under the federal standard, “tipped employees” are generally defined as those who earn at least $30 per month in tips, a very low threshold.

Recent headline-grabbing minimum wage increase plans at the state level were adopted by California and New York in early April. California’s current $10 hourly minimum wage will rise in steps to $15 per hour by 2022. In California, this also applies to tipped employees, as tips don’t offset minimum wages there. Employers with 25 or fewer workers will have another year to meet that standard.

New York’s current $9 per hour minimum wage will rise to $15 in New York City within three years, and be phased in at lower levels throughout the rest of the state based on a formula tied to economic indicators, including inflation.

Although supporters of an increase in the federal minimum wage in Congress have been unsuccessful in persuading enough of their colleagues to make it a reality, President Obama in 2014 issued an executive order that raised the minimum wage for new employees hired under federal contracts to $10.10 per hour in 2015.

State minimum wage laws generally contain exceptions, often designed to shield the smallest employers. For example, Maryland exempts “certain establishments selling food and drink for consumption on the premises grossing less than $400,000 annually,” according to the state’s labor department. Because Maryland’s current hourly minimum wage — $8.75 in most counties — is above the federal $7.25 rate, the effect of the small employer exemption is merely to require those exempted businesses to pay the federal minimum.

Technically, the Fair Labor Standards Act that establishes the federal minimum wage exempts companies with annual revenue below $500,000. But the U.S. Department of Labor (DOL), says this exemption doesn’t apply to workers who are “individually engaged in interstate commerce, the production of goods for interstate commerce, or an activity that is closely related and directly essential to the production of such goods.”

As a practical matter, proving that employee labor meets that test would be difficult. In addition, labor market pressures might make it hard to recruit qualified workers for less than an hourly wage of $7.25 in most parts of the country.

Even if minimum wage laws — state, local or federal — don’t push up what you must pay workers on an hourly basis any time soon, a related big regulatory issue looming on the horizon could have an even larger impact. Last June, the DOL proposed new rules raising the salary limit for workers who are considered non-exempt, and thus subject to overtime pay.

An employee’s exempt status is established by a series of qualitative tests, plus the current annual earnings threshold of $23,660. Below that level, employees are automatically deemed eligible for overtime pay, regardless of the nature of their jobs. The DOL proposed to raise that ceiling to $50,400, a 113% jump.

Not surprisingly, that proposal triggered a flood of critical comments from employers and individuals (reportedly around 270,000). Unable to process and digest that torrent of feedback quickly enough, the DOL states it likely will not be able to come up with a final rule before the end of 2016.

Whatever the outcome, managing a business successfully always requires ensuring that employees are as motivated and productive as possible. Forced wage increases only add urgency to that task.