Avoid the Traps of Unequal Pay 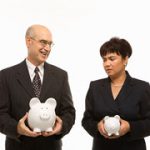 On average, women are paid less than men, but the difference may be smaller than you think. You may have heard widely quoted statistics which can be misleading, such as the belief that women earn 76 cents for every dollar that men make. While men do make more, the gap narrows when you adjust for differences in job category and tenure. Still, a gap exists, and one compensation management software company calls it the “uncontrolled gender pay gap.”

That software company, PayScale, claims that when data is adjusted to allow an apples-to-apples comparison, women make about 98 cents for every dollar a man makes, although this varies by industry.

The gap might be smaller than previously thought, but is it justified? Pay equity advocates have had some recent successes in challenging common practices that may contribute to gaps, such as asking job candidates for their pay history before formulating a job offer. Specifically, the practice will be banned in Philadelphia in May. And beginning next year, employers in Massachusetts will face that restriction.

The concern is that women are, in effect, locked in to lower pay scales due to past pay discrimination. Employers are sometimes reluctant to bring in a new employee at a substantially higher rate of pay than he or she is or was already making, if the purpose is only to keep new workers on par with current employees in similar jobs. That’s understandable, because paying more than appears necessary defies financial common sense. But there’s more to the story.

Given the philosophical diversity of the country, it’s unlikely that laws such as those enacted in Philadelphia and Massachusetts will take the entire country by storm. But even without such laws, “Employers should start thinking about the ramifications of stopping previous-pay discussions, whether or not their locality passes measures banning these inquiries,” according to the Society for Human Resource Management.

Why? For one thing, debate and discussion about this topic is building even in remote areas of the country. Over time, more female (and also some male) job hunters may simply decline to reveal their pay history.

There’s a good chance that, at some time in the future, you’ll encounter job applicants who simply won’t reveal their pay history. Suppose you get an application without pay data, from someone who, otherwise, seems well-suited to the position. Will you refuse to consider that person? If so, this could mean missing out on an excellent candidate. Instead, be prepared to continue assessing the candidate without regard to pay history.

You should already have some kind of system in place that you use to establish pay ranges for particular jobs, based both on the value of that job to the organization, and the prevailing pay for positions at your company. This is important even when you’re not hiring, because your current employees need to have some level of confidence that their pay isn’t arbitrarily determined.

By refusing to consider an applicant who won’t reveal his or her pay history, you could be doing your company a disservice. That is, you could miss out on hiring the best candidate for the job, and in the process, may even end up paying more than necessary to another applicant.

If a candidate you are interested in is reluctant to reveal his or her pay history, ask for a range, or general idea of what the person expects as a starting wage. If you end up in the same pay ballpark, you can proceed from there. Just make sure you go to the interview with some pay research under your belt, so you don’t undervalue the job or offer more than you should. Chances are, the applicant already has a good idea how much a job is worth, and so should you.

Armed with some research, you may be able to overcome concerns about a perceived “low” pay range by explaining your process for evaluating performance and the possible pay increases that can result from a strong performance review.

Gender Gap in Your Pay Scale?

Polls taken by PayScale reveal that many workers consider this a hot-button issue, even if you’ve never heard it mentioned. That’s why PayScale warns, “If your employees don’t think you’re doing enough to address gender inequity, they might already have one foot out the door.”

As mentioned earlier, do you pay less to a worker who has returned to a job after a long absence (typically a woman who took time off to raise children)? If so, consider whether time on the job improves performance. If not, does it really make sense to pay her less? You could find yourself accused of pay inequity, based on gender. The potential ill will is probably not worth the money saved.

Hiring the right people at the right pay is crucial to your organization’s success. Compensation and recruiting consultants can provide more insights on these topics if you are unsure about whether you’re doing the right thing.