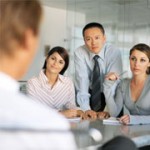 In a poll that measures candidate behavior, the online job site CareerBuilder asked participants what aspects of the hiring process carried the most weight when choosing an offer. The number one factor cited in 44% of responses was the in-person job interview. The job offer itself was named as the key factor in less than 20% of the answers.

CareerBuilder’s candidate behavior survey asked: “What are the key reasons that prompted you to look for a new job?” The most common response out of 13 possible answers was, “Looking for a higher base salary.” Second was “Improved benefits.” But other responses were also found to be powerful motivators that attracted strong candidates and had less to do with immediate financial gain. In this order, the third, fourth and fifth most common answers were that job seekers were looking for:

In many cases, money was less of a motivating factor than the experience they had meeting the employer. In fact, on average, respondents said they would accept a salary that was 5% below what they considered the bare minimum to work for an employer that left a great impression during the job interview.

Another consequence — good or bad — of a company’s hiring procedures is how fast word spreads. Prospective employees talk about their experiences, especially bad ones. Respondents to the CareerBuilder survey said when the experience was bad, they told at least 10 people, but when it was good, they told fewer.

So, what makes an interview process good in the minds of job applicants? Here are the top five out of 11 possible answers, most of which are surprisingly easy to accommodate:

1. The company sent an automated message acknowledging they received the resume/application.

2. The interview was conducted by multiple people from the company.

3. The process included a tour of the office/work area.

4. A hiring manager/employee of the company emailed the applicant to acknowledge that the resume/application was received.

5. A hiring manager/employee of the company called to acknowledge receiving the resume/application.

See Yourself as a Broker

When it comes to the job interview itself, think of yourself as a neutral intermediary trying to broker the ideal employer/employee relationship. This is especially true if the candidate has skills that are in short supply. Instead of treating the interview as an opportunity to ferret out weaknesses, ask questions that help you learn important things about the job candidate, while also showcasing your organization as a good place to work.

Suppose, for example, that the job you’re trying to fill wouldn’t give “Candidate A” significantly more responsibility than she currently has, but you can see that she has the potential to take on more. Ask how quickly she wants to move up in your organization.

Although you probably cannot make any promises about when a promotion might come along, the question shows that you’re thinking about the individual’s future, not just trying to plug a hole.

Get a Team Perspective

Along similar lines, you can create an interviewing team to show the candidate you consider him or her sufficiently promising to not only warrant the investment of your own time, but that of your team members as well. This also provides you with more insights on the job applicants, given the different perspectives and observations each interviewer brings to the table.

If you use a team approach, you may want to assign different functions to the team members. For example, you may represent your organization’s leadership, while a technical expert could be there to ask technical questions. A third team member might be someone who would be a peer to the person you hire, allowing the applicant to get an idea of who his or her coworkers would be.

Before conducting the interview, be sure to have a clear fix on the most critical attributes you’re looking for in the person you need to hire. While you want to showcase your company in a positive light, don’t lose sight of the criteria you set and allow the interview to drift into less important qualifications.

It’s easy to get off track, particularly because a job candidate will naturally want to highlight his or her own area of strength. If you realize the conversation is being steered away from what you consider the most important areas of focus, pull it back where it needs to be.

In the end, you’ll have a balanced selection process — one that gives the candidate a positive perception of the opportunity that may be available, and also provides you with the insights required to make a sound hiring decision.