Do You Keep Adequate Records for Charitable Contributions? 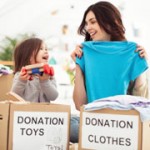 The IRS rules for substantiating deductions for charitable contributions are strict. The taxpayers in a recent U.S. Tax Court case found this out the hard way when the court denied their deduction of more than $37,000 for numerous noncash items donated to various charities. To add insult to injury, the court assessed a 20 percent accuracy-related penalty on the taxpayers.

Don’t Be Late for a Very Important Date

When should you obtain a “contemporaneous” written acknowledgment from a charity? The IRS requires this documentation to be obtained by the earlier of:

One married couple was tripped up by this requirement in another Tax Court case.

In 2007, the couple made several cash donations of greater than $250 to their church. In January 2008, the church gave them a letter that acknowledged their contributions, but the letter didn’t include the required statement that no goods or services were received in exchange for the donations. The church eventually provided a corrected letter, but it was sent well after the deadline for filing 2007 tax returns. This oversight cost the couple a deduction of $22,517. (Durden v. Commissioner, T.C. Memo 2012-140)

For federal income tax purposes, a taxpayer is generally entitled to deduct the fair market value (FMV) of donated property that’s been held longer than a year, even if the property has appreciated in value. But strict substantiation requirements apply to all charitable contributions. If you fail to maintain timely, detailed records or overestimate an item’s FMV, the IRS may challenge a deduction for donated personal property, claiming that the amount has been inflated.

The IRS suggests using guidelines from charities, such as the Salvation Army or Goodwill, to establish the FMV of household items that have declined in value over the years. To qualify for any deduction, the items must still be in good condition. The specific recordkeeping requirements for noncash contributions depend on the value of the gifts.

Gifts under $250. Obtain a receipt from the charity showing the name of the organization, the date and location of the contribution, and a detailed description of the property. However, you’re not required to get a receipt when it’s impractical. For example, no receipt is required if you leave property at a charity’s unattended drop box after hours. You must also keep other reliable written records, including the FMV of the donated items and how you arrived at that amount.

Gifts of $250 to $499. Obtain a written contemporaneous acknowledgment from the charity, describing the property and specifying whether you received any benefits in return for your gift. If you received benefits, provide a good-faith estimate of the value of such benefits. (See right-hand box for more information.)

Important note: An acknowledgment is required for each contribution of $250 or more, even if several donations are made to the same charity during the tax year. Multiple contributions are not aggregated for purposes of the $250 limit as long as they are made on separate occasions.

Gifts of $500 to $4,999. In addition to other substantiation requirements, maintain records of the approximate date the property was acquired, the manner of its acquisition, a detailed description of the property, the cost or other basis of the property, the FMV of the property when it was donated and the method you used in determining the value. For this category, contributions of “similar items” must be aggregated.

Gifts of $5,000 or more. In addition to the previously mentioned recordkeeping requirements, provide an independent appraisal of the donated property. Attach a copy of the appraisal to your federal income tax return. When determining whether your deduction is over $5,000, combine deductions for all similar items donated to any charitable organization during the year.

A recent Tax Court case demonstrates how these recordkeeping rules often trip up taxpayers who make charitable donations. On their 2011 tax return, a married couple claimed a total charitable deduction of $37,315, comprised of gifts of property to four organizations. The IRS denied these deductions due to lack of substantiation.

The taxpayers deducted $13,115 of noncash charitable contributions to a church during its annual flea market, including:

They also reported combined donations of $24,200 to Goodwill Industries, the Military Order of the Purple Heart Service Foundation and the Vietnam Veterans of America. The second group of donations included:

The taxpayers testified that they contributed batches of items to Goodwill at various times, generally leaving goods in large bins after hours. They left large items, such as furniture, outside the warehouse door. For the donations to the Purple Heart and Vietnam Veterans, the taxpayers scheduled pick-ups by charity personnel and left the items outside their home. The charity usually left a doorknob hanger saying only, “Thank you for your contribution.” The taxpayers claimed they were careful to ensure that the items in each batch were worth less than $250, because they believed that this eliminated the need to obtain receipts.

The court did not find the taxpayers’ testimony to be credible. The contributions to the church’s flea market occurred as a single event worth more than $13,000. With respect to the other contributions, the court noted that for the taxpayers to have intentionally made contributions worth less than $250 each, it would have required 97 separate donations, which is “implausible and has no support in the record.” What’s more, the taxpayers didn’t assign values to the donated items until they prepared their 2012 tax return.

As part of its analysis, the court grouped their 2011 charitable deductions — totaling $37,315 — into the following seven categories:

Based on this analysis, the court reasoned that the taxpayers failed to satisfy the extra substantiation rules for all seven categories. In addition, they also didn’t provide “reliable written records” to support the claims for drop-offs at unattended sites. Furthermore, two categories — clothing and books — had alleged values exceeding $5,000. For these categories, the couple should have also obtained independent appraisals and attached them to their federal tax return.

Finally, most of the property the taxpayers claimed to have donated consisted of used clothing and household items. Because they failed to present credible evidence that these items were in good condition, the entire deduction was disallowed.

But that’s not the end of the story. The court also imposed a 20 percent accuracy-related penalty on the taxpayers for intentionally disregarding the rules. The court wasn’t persuaded by their contention that the underpayment met the “reasonable cause” exception because they allegedly believed that they weren’t required to obtain receipts or acknowledgments from the charities for drop-offs at charity locations after hours or pick-ups by charity personnel from their home. (Kunkel v. Commissioner, T.C. Memo 2015-71)

When making charitable donations, there’s no substitute for accurate recordkeeping. Make sure you comply with the strict letter of the law so you can withstand any potential IRS challenge to your deductions. Contact your professional tax adviser if you’re unsure about the substantiation requirements or need to be referred to a qualified appraisal professional.