5 Recent Supreme Court Decisions that Could Affect Your Business 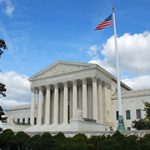 At the end of June, the U.S. Supreme Court adjourned for its summer recess. Here are five recent cases from its 2016 term that may be of interest to business owners and managers.

Under the Employee Retirement Income Security Act of 1974 (ERISA), employees are generally protected from unexpected losses in their retirement plans through various safeguards. However, church plans are specifically exempted from ERISA requirements, in order to avoid any entanglement of government and religion.

Recent legislative proposals to impose state and local sales and use taxes on Internet sales across state lines have yet to come to fruition. The latest version of the Marketplace Fairness Act, which has been kicked around for years, appears to have stalled in Congress. Thus, online sellers still have a decisive tax edge over brick-and-mortar stores.

In the landmark Quill case (Quill v. North Dakota, 504 U.S. 298, 1992), the U.S. Supreme Court ruled that states couldn’t impose sales and use tax collection obligations on vendors without an in-state physical presence. It’s possible that the top court may revisit the Quill interpretation next term if Congress doesn’t enact any related legislation before then.

In this case, a group of employees work for a health care network that operates hospitals and in-patient and out-patient treatment centers in Illinois. The employees are covered under the network’s retirement plan. The network was formed through a merger of two religiously affiliated hospital systems. Although neither system was owned or financially operated by a church, the network remains affiliated with a church.

The employees sued the network. They argued that the retirement plan is subject to ERISA and failing to meet the ERISA requirements is a violation of federal law. The network countered that its plan falls under the exception for church plans. The Seventh Circuit Court affirmed a lower court’s ruling that a church-affiliated organization isn’t a church plan within the meaning of the law.

In a June ruling, the U.S. Supreme Court unanimously agreed that the ERISA exemption for church plans applies to plans maintained by a church-affiliated organization, even if that organization didn’t originally establish the plan.

A company organized under Indiana law and headquartered in Indiana sold liquid water-enhancing products that it shipped to Delaware in accordance with two of its contracts. But a major retailer, organized in Delaware with its primary place of business in Illinois, claimed that these products infringed on its patents for similar products.

The company selling the water-enhancing products argued that Delaware lacked jurisdiction over the lawsuit because the retailer isn’t registered to do business in the state, has no business there and doesn’t solicit any business there. A district court ruled that the subsection of the general venue statute allowing a defendant to reside in multiple jurisdictions for purposes of establishing jurisdiction applies to the patent venue statute.

This precedent conflicts with a previous Supreme Court case, Fourco Glass Co. v. Transmirra Products Corp. (353 U.S. 222, 1957). Fourco Glass holds that corporate jurisdiction is limited to the state of incorporation. The Fifth Circuit decided that the Congressional amendments to the general venue statute post-dated Fourco Glass and, therefore, superseded it.

In the Star Athletica case, the plaintiff is a company that designs and manufactures clothing and accessories used in various athletic activities, including cheerleading. The design concepts for the clothing incorporate several elements — such as colors, shapes and lines — but they don’t consider the functionality of the final clothing. The plaintiff received copyright registration for two-dimensional artwork of designs that were similar to the ones that the defendant company began using.

The Sixth Circuit ruled that the Copyright Act allows companies to copyright graphic features of a design, even if the design isn’t separable from a “useful article.” Then the matter was brought before the U.S. Supreme Court.

In a 6-2 vote, the Court decided that copyright protection is allowed if a feature incorporated into the design of a useful article:

Based on this interpretation, the plaintiff prevailed.

Two lawsuits were initiated in U.S. Bankruptcy Court against the trucking company:

The Third Circuit affirmed the district court’s decision that the Bankruptcy Court had the discretion to approve a settlement scheme outside the Chapter 11 proceedings, even if it didn’t comply with distribution priority scheme under the Bankruptcy Code.

In a 6-2 decision, the U.S. Supreme Court sided with the truck drivers. The Court held that bankruptcy courts may not approve structured dismissals that don’t follow the priority order established in the Bankruptcy Code. While courts have flexibility, settlements must be viewed in light of the claims of affected creditors.

The Securities and Exchange Commission (SEC) sued a New Mexico-based investment advisor for misappropriating funds from four business development companies. The district court found in favor of the SEC and ordered the advisor to pay $34.9 million for “the ill-gotten gains” connected to the violations. But the advisor argued this “disgorgement” remedy is barred by a five-year statute of limitations.

The Tenth Circuit held that the usual five-year statute of limitations didn’t apply to this case because the ordered payment was remedial rather than punitive in nature. Therefore, a disgorgement payment may be allowed.

However, the Supreme Court has unanimously reversed the Tenth Circuit ruling. The Court decided that SEC disgorgement functions as a penalty, so it is subject to the five-year statute of limitations. This case is being widely viewed by commentators as a further erosion of the enforcement powers of the SEC.