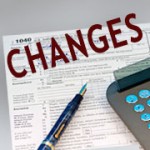 Tax season is finally here. The deadline for calendar-year corporations to file a return (or an extension) is Monday, March 16. The deadline for individuals to file their income tax returns (or an extension) is Wednesday, April 15. As businesses and individuals start gathering financial records to give to their tax professionals, they should know how two recent federal laws might affect their 2014 income tax returns.

The Tax Increase Prevention Act of 2014 (TIPA), which became law in December 2014, extended the following individual tax breaks to cover the 2014 tax year. Your 2014 return may be favorably affected by these extensions, many of which were “borrowed” from previous tax years.

Deduction for Higher Education Tuition and Related Fees. This write-off can be up to $4,000 or up to $2,000 for higher-income individuals.

Tax-Free Treatment for Forgiven Principal Residence Mortgage Debt. Canceled debts generally count as taxable cancellation of debt (COD) income. A temporary exception applies to COD income from canceled mortgage debt that was used to acquire a principal residence. Under the exception, up to $2 million of such debt that was canceled in 2014 can be tax-free for federal income tax purposes.

$500 Credit for Energy-Efficient Home Improvements. Under this break, you can potentially claim a tax credit of up to $500 for certain energy-saving improvements made to your principal residence in 2014.

$250 Deduction for K-12 Educator Expenses. Teachers and other eligible personnel at K-12 schools can deduct up to $250 of school-related expenses paid out of their own pockets in 2014.

TIPA also extended a long list of federal business tax breaks through 2014. The provisions most likely to be available to small and medium-size businesses are summarized below.

Fifty Percent First-Year Bonus Depreciation. Fifty percent first-year bonus depreciation has been extended to cover qualifying new (not used) assets placed in service in calendar year 2014. However, the placed-in-service deadline has been extended to December 31, 2015, for certain assets that have longer production periods, such as transportation equipment and aircraft.

For a new passenger auto or a new light truck or new light van that is subject to the luxury auto depreciation limitations, the 50 percent bonus depreciation provision increases the maximum first-year depreciation deduction by $8,000 for vehicles that were used 100 percent for business last year.

Research Credit. The research credit has once again been extended to cover qualifying expenditures paid or incurred in 2014.

Work Opportunity Credit. The general deadline for employing eligible individuals for purposes of claiming the Work Opportunity Tax Credit has been extended to cover qualifying hiring that occurred in 2014.

Two brand-new federal tax issues can impact your 2014 personal income tax return. Both relate to changes that were included in the 2010 Affordable Care Act (ACA).

New Penalty for Failure to Comply with Health Insurance Mandate. The ACA established a new federal income tax penalty for failure to carry minimum essential coverage. This requirement is more commonly known as the “individual mandate.” Last year was the introductory year for the penalty, so your 2014 Form 1040 could be affected.

You can potentially owe the penalty for any month during 2014 when you did not have qualifying health coverage for yourself and your family, if applicable. The government calls the penalty the shared responsibility payment, which sounds harmless. But it’s really a penalty.

No penalty is owed if you (and all members of your family, if applicable) had qualifying health insurance coverage for all of last year. In this case, simply check the appropriate box on Form 1040.

New Premium Assistance Tax Credit. The ACA also established a new federal income tax credit called the “premium assistance tax credit” (PTC). Last year was the introductory year for the PTC, so you might be able to claim it on your 2014 return. The PTC is available to eligible individuals and families who obtained health coverage in a qualifying plan by enrolling through the federal insurance exchange or a state-run insurance exchange.

In general, you are eligible for the PTC if your household income was between 100 percent and 400 percent of the federal poverty line and you didn’t have access to affordable employer-sponsored coverage. The allowable credit amount can vary widely depending on your specific circumstances.

The PTC can be advanced directly to the insurance company to lower your monthly premiums or it can be claimed when you file your 2014 Form 1040. You may not know the exact amount of your allowable PTC for last year until you file.

If advance PTC payments were made to your insurance company last year, the amount of those payments should be reported to you by the exchange on Form 1095-A, Health Insurance Marketplace Statement, which you should receive by no later than early February. When your 2014 return is prepared, you’ll need to calculate the difference between your advance PTC payments (if any) and the PTC amount you’re entitled to. If the advance credit payments that were paid to your health care provider were more than the actual credit, you may need to pay the difference with your tax return.

Important Note: The PTC is a refundable credit. As such, you can collect the full allowable credit amount even if it exceeds your federal income tax bill. In other words, the PTC amount is first used to reduce your tax bill. After your bill has been reduced to zero, any remaining PTC can be either refunded to you in cash or used to make estimated tax payments for your 2015 tax year.

Preparing personal and business tax returns can be a complicated and confusing process. Tax laws are constantly changing, and other developments — such as new IRS regulations and new court decisions — can affect your return. You also may be required to file state income tax returns, and the rules for those returns may differ from the federal rules. For expert assistance, contact us.